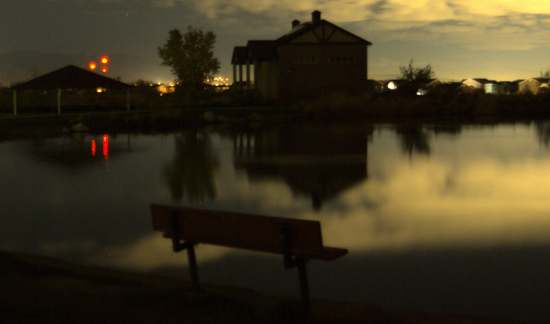 Tonight after work, I found a simple trail that went around a pond. It said 2.5 miles or so, and I thought that would be perfect. Then about a half a mile in, I felt the chill of the late November night soaking in through my flannel shirt. It may have been that I was also wearing shorts, but we won’t go there, I feel silly enough letting it be known that I had shorts and a flannel shirt on. It was low 40’s so it wasn’t “that” cold, but whoah nelly, waiting for some of these 30 second exposures to finish felt like minutes.

I expected a little more work to be done on this short walk. Maybe it was the chill in the air, or just how exhausted I feel sometimes, but really, there wasn’t much that went through my mind tonight except “Justin, you should have worn pants”, and “Why are all my friggin’ pictures blurry?” I wish it was that simple, but like most things in life, it wasn’t.

I have a feeling that in the next few days, maybe a week, there will be a hike that opens the floodgates, and I’ll be handed a plethora of things to sort out. I hope I’m on a good long, difficult hike when it comes at me. I wonder if I’ll ever learn how to bring everything to the surface when it happens, and not hours, days, or weeks later. It would be able to start sorting out in the moment instead of moments into the future. Especially when I thought I had tucked it away, and finished feeling the discomfort of it all.

Regardless, tonight had some amazing clouds. The wind was up high, so the clouds were moving, but the trees weren’t. The pond reflected the clouds wonderfully, and the stars peeked through nice and bright. The images are pretty unique in that the clouds are blurred because they were moving a lot, and the stars were “pretty” sharp behind them. I say “pretty” because apparently I can’t focus shit with my cameras (grumpy at me, not you my wonderful Pentax cameras).

Here’s the wad of images from tonight, enjoy (remember, this was at midnight or later. Some of the images look almost day light, it wasn’t, it was dark except for the clouds (backlit by the city lights), and the neighboring houses.