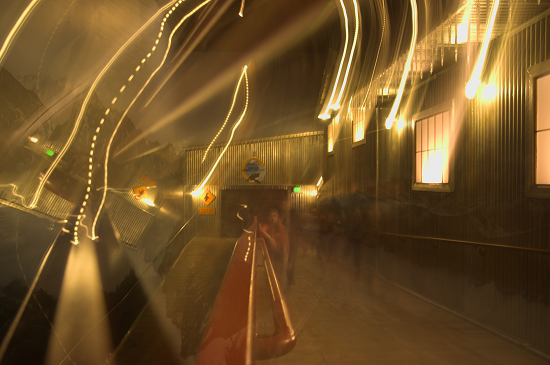 The day after we explored the Masonic Temple in SLC, we went to the “Loveland Living Planet Aquarium“. I haven’t been there for a few years and it seems to always be improving, growing, and adding things to their inventory of wonderful animals. Of course I drug my camera along, and Jamie was more than patient with me as i stopped EVERYWHERE to clickity clack another picture. The picture for this post is from inside the Aquarium. I was taking long exposures in a dark’ish hallway and the tripod slipped on the hand rail while the shutter was open. I like how it turned out personally. The finished image is down here in the post somewhere (I don’t’ know where yet, I’m just writing this part, right now).

These 4 pictures, are what you’ll see when you get there. I “STILL” don’t “REALLY” know what the “They came from Mars” thing is that’s out front, but it’s got Doctor Who writing here and there, it’s enormous, and after me and Jamie got done exploring inside, we came out and wondered around the entire thing (I’m sure there’ll be more pictures for that specific moment down below).

I’ve got to work on my “less than enough light” photography skills, because there were some really great animals to SHOOT (with my camera), but they turned out pretty grainy. Practice more I guess (at least I’m not using film anymore, that’d be COSTLY).

As hard as I tried, this dang Parrot would not “Pose” for me, so I did what I could, and as you can see, he’s not impressed either (I took a BUNCH of a duck before we got too far into this area, but that little shit wouldn’t hold still for NO ONE!).

After I gave up trying to get a good picture of POLLY (Yeah, I’m gonna call “it” that), we wondered around, sweating, and suffering through the humidity (Nope, humidity can jump right off the cliff thank you very much), we strolled up and around the perimeter, and got to look down on some people before we left that humid hell.

Once we escaped the heat and humidity, we took a few minutes to cool off, let some of our secretions evaporate, and got ready for the PENGUINS (the only reason you go to an Aquarium, so for the PENGUINS!). First I had to try to get an interesting picture of this bendy hand rail, and catch a picture of a little girl that KNOWS what’s goin’ on.

If you want a real photography challenge, try to get a picture of moving penguins, shoot through hard water stained glass, in a dark room, with kids bumping into you, and the occasional smell of “Fresh” seafood. No you may not use a tripod! I did my best, and I’m not proud of any of these, but they’re penguins, you can tell they’re penguins, and it was fun to see them looking around, swimming through each other’s shit, and shivering their little “wings” when they woke up from their naps.

Outside the happy place (aka: Penguin exhibit) was a corrugated steel lined hallway sporting old looking windows, with old’timmey lights, between them a red hand rail, and “PEOPLE!”. When your camera flips around the hand rail because you didn’t snug down your bendy tripod, the image looks like this!

This part of the Aquarium has always felt out of place to me. Ironically, it is also one of the most interesting places inside the aquarium for me. It feels like either an old shed or an industrial bar in Europe somewhere trying to be “American”. Here is what the picture was supposed to turn out like (more or less, because “armature”).

The underground portion of the Aquarium’s tank is, southing to say the least. I brought my little shits here once, and there weren’t many people and we got to sit and watch for a while. This trip, not so lucky, it was people from side to side (Don’t they know who I am? Why didn’t they part like the sea for that one guy with a stick that talked to a bush n shit?).

OH WAIT! We did see some Coral related stuff on the way to the tunnel of doom (under the sharks). Mind you I had been standing there waiting for people to move, they moved, I took one quick picture, checked it, looked this lady “IN THE EYE”, brought the camera up to my face, and she walked in front of me and stayed (until I gave up and left). Here are the two pictures .. … SIGH!

After that encounter, I wasn’t in the mood to wait for people, but what did karma have in store for me? I GIANT Octopus in the middle of the window, hanging out, and .. TWO KIDS JUMPED IN THE WAY, SCARED THE 8 LEGGED MONSTER AWAY, and this is the picture .. phuquing kids, don’t they know who I am?

Another part of this aquarium that I really enjoy (normally) is the tunnel under the sharks N shit. This trip however, “PEOPLE”. So I looked (took a pic), zipped through (took a pic), looked back (took a pic), and moved along. Phuquing people.. I need to live in a van, down by the river!

There was however, a great place to chill, watch the fish, and have a little elbow room between you and that snot nosed little shit that keeps kicking the glass and laughing his dried up slobber caked mouth off as the fish flinch (sorry fish, we’ll feed him to the sharks as soon as no one is looking). Also, sharks never stop, it was a little dark, and I’m using the same excuse I used on the Penguins here. Sorry, not sorry, it was still fun.

After the sharks, we wondered into the “Southern Utah” part of the place. It’s “fine”, but since I’ve been there, I enjoy it, and it tries to burn my face off every time I go there, I’ll only post a picture or two that I “kind of like” because, it was a little boring photographically (The Otters weren’t there, so, who cares lol).

And “we’re back outside”. We did pause somewhere to stuff our pie holes with expensive junk food (Thank you for the Penguin Donut Jamie). Outside was a breath of fresh air (literally). We spent a while in the gift shop (aka the exit). Made it through with out handing them my money, but they always have something that catches my eye. Best to go in there with a 50 for lunch (~ for 2 people give or take), and no cha-ching for the gift shop, cuz it’ll clean you out.

Here’s some stuff from outside. I’m getting tired of writing about what the pictures are related to, and honestly, outside, it’s just cool looking stuff, I have no idea what it means, I just like how it looks. So here, click and enjoy, I’m going to go get some work done, and escape this place (work).

It was a fun trip, even with all the people. Who’d a thunk’ so many damn people would be out and about on a friggin’ Sunday. Don’t they know we’re in Utah, and people ain’t supposed to go out on a SUNDAY? Especially if it inconveniences ME!? Pa-shaw, anyhow .. fun day, really enjoyed seeing the animals (even if it was on tippy toes behind someone’s loud snotty smelly kid).

Take care, you do you, just don’t hurt other people doing it… ~me