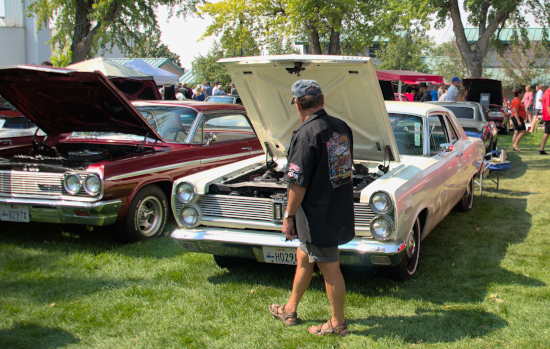 Probably the last of the of the season, Peach Days is the last big vehicle show of the summer. It’s one of the best for us car guys because it doesn’t cost us anything to enter, it is big and popular, and the city of Brigham supports it. Peach Days is bigger than just the car show. There are events in the days before the car show, and a parade the morning of the car show. We lucked out this year, it was just a touch above chilly in the morning, and wasn’t unbearable the rest of the day (although I would have liked to see 10* knocked off the temperature, it was okay).

Kicking off the day we idled in line for, much too long. I am glad my dad hooked me up with a radiator for a big block so I can idle for ever and not have an overheated engine. Unfortunately, I had this POS ‘camaro’ infront of me, and a phuquing Harley motorcycle with a much too bright headlight blasting me in the peepers behind me.

Living in Utah after seeing the world (let alone the rest of the United States), a few things I can guarantee are all about Utah is that most car shows will be full of Mustangs and chevys (Most chevy fans also have mullets). Drivers will creep up to stop lights for half a city block before they come to a compete stop. Sometimes you get to see a true work of art, covered in Pennies.

After we got parked, and re-parked (between 5 chevys) we wondered around a minute to try and warm Jamie up. I took a few random pictures, these are some of them.

First things first, we wondered up to Main St because there was gonna be a parade, and Jamie was all giggly about getting to embarrass her Jobes sisters. We also got to see dogs, and a few odds and ends that I snapped some pictures of, and enjoyed random people displaying their asinine attitudes.

When we got back to the area where the cars where, they were stating a 9/11 Veteran Appreciation thing. I get really uncomfortable when people call me out veteran style. Yes, I served, yes I have seen, done, and experienced things I’m glad my kids won’t ever have to (Unless they choose to). It was my choice to serve, and when I was put in situations that turned bad, I had volunteered for them so it is on me. I didn’t volunteer out of a sense of pride, or duty to my country, I volunteered because it seemed interesting, fun, or exciting. I’m proud of my career, glad I did it, would do it again (but differently) if I were younger, and do my best to support the guys that are serving now.

On our way back to the car after the Veterans shin dig I stole some more pictures. See?

Anyhow, basically, I’ve forgotten what order all the rest of the images are supposed to be in, but here they are (Dogs, took pictures of dogs every time I felt I could kneel and get back up). I even got a plethora of slobber from a Great Dane (Miss our Great Dane…. Sometimes).

OH! We also hit a Quilting show on the way out of town.. Hopefully next year it’ll be a little bigger..