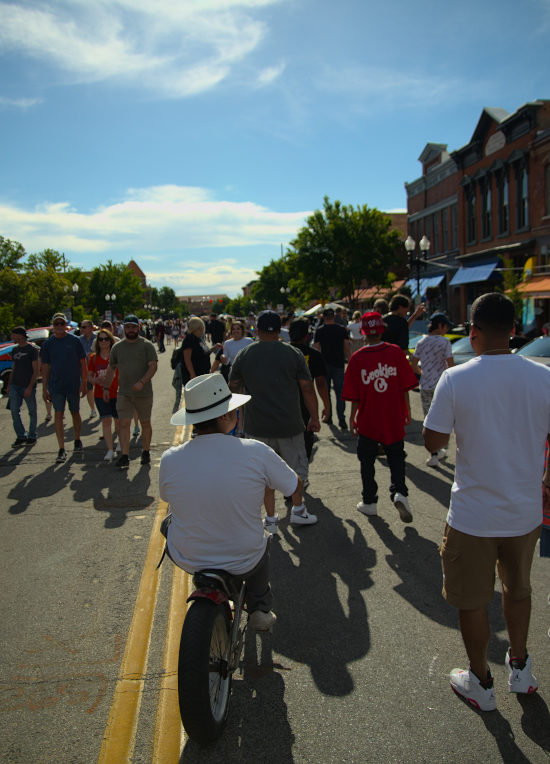 Earlier than normal (June as apposed to Sept/Oct), but still a really good turnout. For some reason, I tend to show up way too early. If I were in a car club, I could show up a lot earlier, but as a lone dog, I’m not supposed to show up till 2’ish. I timed it well this year, and got to park 1st in row next to a couple of really nice Broncos. Last year I was stuck in a pile of rice burning import cars with coffee can exhausts, and wheels so cambered out they were only rollin’ on the edge of the tire (They call it “Stance”, I call it “Goofy as shit”).

I let Dayton and his girlfriend bring the car back to the house from the storage area. It isn’t often that I get to see the car from the outside. Sure rides a lot lower than it feels when you’re driving it. Never ending project, but fun none the less.

When I got to the entry point, and headed down to see where they were going to make me park it, I was very pleased that they dropped me in the 1st (or last) spot on the south side of the road. It’s got the early shade, and I was also facing the exit. It was very nice, I can’t complain. The two Broncos next to me belonged to the same guy. I thought he’d restored them, but he bought them. I appreciate keeping the classics in running order and enjoying them, but I feel more strongly that you should lay your hands on them to get them that way. When a person buys a finished vehicle, it makes me feel conflicted. I mean, good for him that he’s got enough money to just buy what he wants, but boo on him that he didn’t turn a wrench on it him self. Anyhow, here’s a few of where I was parked and what it looked like before the public started pouring in.

Since it is a good 3 hours before the show is open to the public after we get to park, I wiped the car down, opened it up, and walked back to my house (3 blocks away). Along the way I can’t help but take pictures. Here are a few pictures from my walk home, at home, and what ever I saw that needed clicked.

About 4’ish I decided to zip back over and make sure no one fucked with my car or stole my camping chairs. Luckily, MOST of the time when you attend a car show, your stuff is kind of “okay” since most of the people around you know that you are who brought that shit, and it’s probably no anyone else’s shit. All was well when I got back, so I snagged some waffle goodness (From Waffle Love), and wondered around for a few minutes.

Once Jamie, Chris, and my dad arrived, we went for another round (walked up from Wall to Washington on one side, and back on the other side). I brought my Pentax K10D and a Sigma 18-200 lens for her to tinker with (She’s sleeping right now, so I’ll post her pictures after I teach her how to edit them a little). I think I’ll just drop all the pictures on now because it’s about 10 after midnight, and I still need a shower, eye drops (my eyes are smoked), and get to sleeping.

Real quick on this pile of pictures. Some are just different perspectives of cars or motorcycles I already found, and the rest are from around Union Station and the retired trains they’ve got on the North side of the building (There was a Tattoo convention going on inside, so we couldn’t get in there to take those pictures).

Another good show, and a nice environment with interesting people, and really good people watching. I want to get better at asking people if I can take their picture, or at least getting less creepy at taking people’s pictures. I also want to take pictures of ALL the dogs, but when you kneel down to get a good picture of a dog, you’re also taking pictures of everyone’s butts, crotches, or knee caps. It is really difficult to get a good animal picture when there are so many asses around (that was funnier in my head).

Take care everyone, I hope you’ve had a good day too, and never forget, your hands, mind, and creativity can make something wonderful out of junk. ~me