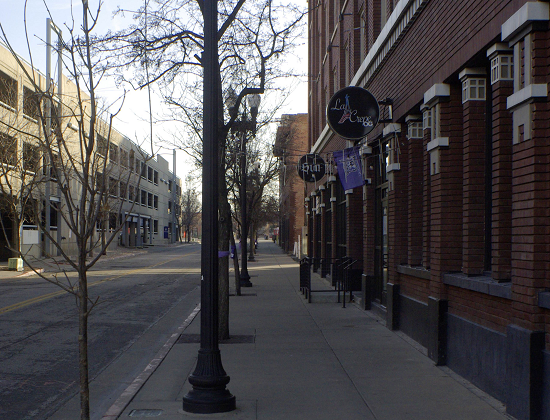 I use the term “Around Ogden” loosely because we really only walked up 24th street, down 25th street and headed for home. Yes we drove to 24th street from my home on 28th street, but we had a few trips to do while we were out, so we weren’t being “that” lazy :).

I’d talked about getting out to at least take a few pictures for weeks, but last weekend we made it happen. Jamie was gracious enough to wait for me to take pictures of “things and stuff” that had no business getting a picture taken, but I really enjoy taking pictures of things that don’t look that unusual until you lock them into a framed image.

It has been at least 2 months (more I think) since I got out and hammered down on my shutter button. I didn’t take many pictures this weekend, but it was nice to get the camera out and smack it around a little bit.

I also used one of the 28mm lenses I had purchased last summer. I used it a few times out and about hiking, but “HATED” it because it rainbow hazed every damn image I took. Turns out, cheap 28mm lenses do not like being used at their most wide open aperture (F2 in this lens’ case). I mean “who’d a thunk” that a lens with a setting printed on it’s aperture ring wouldn’t work on the setting it has. Little known fact, cheap lenses are very sensitive to their aperture vs clarity ratio. I guess that’s why a good 28mm lens costs $600, and my 28mm lenses cost $20 used on e-Bay and were made in the 70’s. Now I know that my lenses (I’ve got two or three 28mm lenses that I’ve bought used. I kept buying them because each one sucked in a different way when I used their fastest F stop (I love bokeh, and the best bokeh is with the lens WIDE OPEN!)). In normal speak, “I like to crank my lenses iris as big as it’ll go (smallest F number), set the ISO as low as it’ll go (ISO is how sensitive the film is to light, lower the ISO the clearer your image, the higher the ISO the better pictures will look in poor or dim light). My K10D goes down to 100, my K100D goes down to 200), and I like to get up close and snuggly to what ever I’m taking a photo of to exaggerate the bokeh and bring sharp focus to the smallest of details I’m up close and intimate with (my style of photography is NOT conducive to portrait photography, unless you want to see every eyelash follicle, the gunk in the corner of your eye, each plucked eyebrow hole, and every single microscopic blemish in your otherwise porcelain skin, stick with the “photographers” using their phone). I’ll learn to do portrait photography eventually, but for now “EWWWW People!”.

I was surprised at how many still colorful flowers and plants there were (It is mid January in northern Utah after all, normally dead, brown, muck is the most popular colors). I took a picture of one or two colorful plants (Fuckin’ berries even mock my in the winter (not really, but I love catching berries in the wild)).

I brought my Pentax K100D hoping Jamie could use that and the feel of “photography” again, but it puttered out after one image (Turns out, it does NOT like my best lens – it died on me when I was using that same lens a few months ago). That poor camera is lens free, batteries out, and I’m hoping it’ll come through like it did for me months ago.

Enough jabbering about absolutely nothing unparticular. Here are the 15 images from last weekend that I enjoyed seeing.