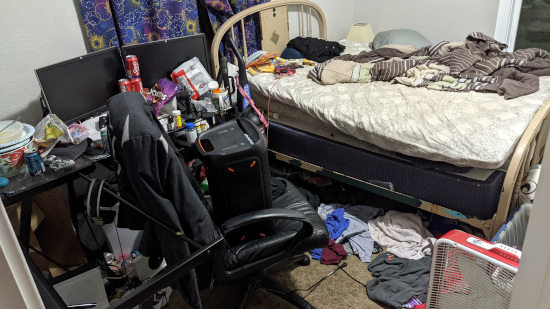 I’ve received a plethora of advice on dealing with a disrespectful child. Not necessarily disrespectful to me, but to what I try to provide for him. Most people know the story about how many of my vehicles he’s tore up, and how his bedroom is so bad it will effect the resale value of my house. Let’s start from the beginning.

I purchased a 2005 Dodge Magnum for my daily car in 2017. I drove it for about a year after changing all the front suspension, timing belt, water pump, putting new wheels and tires on it, replacing several broken interior parts, and installing an upgraded stereo system. It was a great car and served me well. When he turned 16, I gave him the car to drive to school every day. About a year later, he seized the motor (after lots of showing off with parking lot burnouts, donuts, and rev limiter sessions to hear the motor scream).

He then drove my truck to school for a few months but it had a loose header, and it made it backfire if you weren’t careful. I told him not to make it backfire because it would burn a valve. About a month later, it was backfiring out the carburetor, and wouldn’t run very well. While tying to get it to run, the starter started to wear out (wouldn’t catch). I told him it was his job to replace the starter, and figure out what was bad (that was 2 years ago).

He started to drive my Crown Victoria but the next week he blew the 4 sub-woofers, and the ac lines got bent somehow (it looked like the battery slid to the side and hit them).

While I worked on the Crown Vic, he drove my Flex. After learning that he was driving it over 100mph on a trip to Idaho I limited him to how much he could drive it. While driving it after that, he had the seats down, and broke the backing on the 3rd row seats, and took off hard enough that the trailer hitch and ball (that is normally on the floor under the seats) slid back and broke the rear hatch (plastic, and now the camera doesn’t work well).

I had him clean the Flex, clamped down on how often he could use it, and he was fine for about 2 weeks. Now, today, after letting him use it for a week and a half, I asked to trade me so I could take it on a date tomorrow. He came to work to trade it and said he’d just transfer every thing to the Crown Vic and throw the trash away once he got home.

When I met him to swap the cars, the Flex smelled so bad I couldn’t breathe. He took two shopping bags full of trash and transferred it to the Crown Vic. I jumped in the Flex and drove it home. The steering wheel was slippery with food grease, the passenger side floor is full of garbage, and has an old muffin and it’s wrapper mashed into the carpet. Under the seats is full of garbage, cup holders are full, door pockets are full, back floor is scattered with garbage, back seat was down, and when I put it up, one of my hats were crushed under the middle seat (last time I went to use my Flex, I my camera bags were upside down in the back, my hiking hat was crushed under everything, there was a plethora of shit all over, and the gas light was on).

I’m trying not to bitch and moan, but I’m also not sure how to correct his behavior, and still have him keep his job. He still needs to get his GED, and learn a trade (I had him talking to Job Corps, but when he got his current job, he stopped talking to them). It is sad and painful to see his give a shit so non existent. I feel like kicking him out is on the table, but I have my doubts he’s got the social skills to hold a job, control his finances, and pay rent consistently enough to keep a roof over his head. He has stayed with friends for months at a time, but that can’t happen for ever (friends that both graduated high school and have held jobs since high school).

His room has food scattered around that’s been in their current place for over a year. There are dishes in there that are literally stuck together after months of dried food gluing them together. There are a dozen or more coke cans stacked around, clothes piled as high as his bed (his dog has shit in them, I caught the dog shitting in there today, I picked up that shit, and a few other piles that were berried under the clothes). The smell in there bleeds into the rest of the house, and it is starting to make me not want to have people over because I’m starting to get embarrassed at how bad it is (anyone that’s known me for a while, knows that my ex wife “peaches” kept our home in a similar fashion).

You love your children to no end, but eventually, I don’t know when or how, they need to respect peoples shit, take responsibility, for their actions, and start “adulting”. My oldest has burned a lot of bridges with me, and I fear that I am going to have a hard time with dishing out tough love with out making him feel like the love is gone.