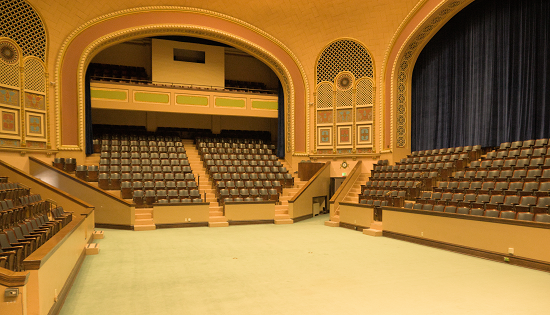 Took a hot minute to get this posted but it’s finally here (I kept thinking it was a bigger problem than it was. My ISP changed my IP address (I forgot to start my bash script to keep that updated with the DNS server I use).

So back on the 12th of March (last Saturday at this point), Jamie let me tag alone with her to a Job’s Daughters tour at Utah’s Grand Lodge (Inside the Masonic Temple) in Salt Lake City (UT). The architecture is absolutely beautiful, fun, interesting, nostalgic, and visually fulfilling. When I walked in to the first room, I snapped this pictures before they turned on the overhead lights. It holler’s out Art Deco with a sprinkle of Egypt just to make it pop.

We got there after the tour had started so we tagged along the rear. I was busy fiddling with my camera so taking up the rear was best, other wise people would be bonkin’ into me and calling me new and exciting names for holding up the line.

In the lodge there are several rooms to perform the rituals, or meetings, or appointing of new members. I was a DeMolay back in high school, but I wasn’t very active. I enjoyed it, but my mind was usually on riding my bike, or finding a way to “pass” a class with out doing more homework. The next room was an Egyptian themed room (and it was also called “The Egyptian” room). I took a few pictures in there, but they’re not worth pointing out individually. The colors were good in person, but my white balance made all these images appear to be very yellow (It was very yellow in there, due to the old lighting, architecture, and colors from when this building was built).

This hallway was really interesting to me (No one else even slowed down). I couldn’t imagine what it’d cost to have doors made like this today. So heavy, beautiful, and solid. They used to be offices, but I’m not sure what the rooms are used for now (I’m assuming storage or somewhere to put extra furniture).

The hallway lead to the entrance to a room that was full of red velvet, highly detailed wall decorations (moldings), and shinny old red leather chairs with brass nails holding them together. Every room was unique in visual style, but standard in the way the seating and main items were arranged.

After the red velvet room (I can’t for the life of me remember the name of that room), we walked through some smaller areas, and there were old (40’s – 50’s?) phones on the walls. I took pictures of a couple, this is one of them (I want one!).

After I made everyone look at me weird by taking a picture of a wall phone, we zipped through another room and into the main conference room. I took a few pictures in here, but I had my ISO cranked pretty high so they were a grainy mess. This one is grainy too, but I like it’s composition, and Jamie really likes it so I’m plopping it on here.

After we got a peek at the Conference room, Jamie and I wondered around the Foyer (can’t spell that), and ventured out the front doors and into the entry way hallway. Did I already say I really REALLY loved the architecture? It’s so good, everywhere.

After wondering around the front area a little while, we did what normal unsupervised adults will do, and we went walk about around the lodge a little more. You’ll also notice, that mixed in with the pictures of members past, there are quite a few of our nation’s 1st President, George Washington. Yup, he was a Mason too.

After a quick pause to snap a pic of one of the many pictures of President George Washington, we went into a room that was full of “Southern Charm”. I took quite a few pictures in her. I think it may have been my favorite room. It felt simple, homie, and relaxing. Jamie and me “may have” snuck up stairs to get a better picture of the room, but don’t tell anyone 🙂 .

After my favorite room, we headed back to the main Forer, and I found another phone, a picture of George Washington (one that the Mormon’s also like to have in their buildings), and Jamie found out that it takes two hands to close the doors on that cabinet under the painting of George Washington.

The Foyer was a pretty good sized rooms. LOTS of pictures of past Masons and Jobs. Some prominent figures from Utah and Salt Lake City, and of course, more than one of George Washington. I hung out on one of the chairs, watched people come and go, looked around, and took a few pictures. The picture of the crystal light IS the light hanging over the couch I was sitting on. I just sped up the shutter speed to the point it made the surrounding portions of the image black. Doesn’t matter, I like it, so it’s here 🙂 .

It was a really fun day, I hadn’t been in this lodge before, but Mendee had (my baby sister). It’s always interesting to see pictures of people from the past. In the images of their faces, you see them as they were when they were looking forward to, tomorrow. Some of them looked like they were probably fun rascals to be around, trouble makers, or pranksters’. Others look like they wouldn’t smile if funny walked up and kicked them in the funny bone.

There’s something to be said about buildings that required most pieces to be hand fabricated to fit that specific location. When the price difference to have a piece of molding carved up a little prettier wasn’t much more than just having it carved enough to fit. I know construction workers, and home builders today take pride in their work, but there’s something about the way an old building physically shows the fingerprints of the carpenters that created them. Hundreds of years, or a hand full of decades, so much changes, so much we take for granted, and so many moments now, this instant, we will reminisce on down the road in our futures, when our future is our children’s past.

All the pictures, in a pile.