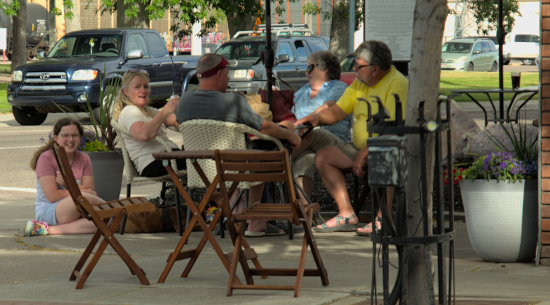 While visiting Poky my sis’ directed us to a dunkin’ burger joint (yes, dunk your burgers in liquid cheese) and it was some pretty good stuff. Mind you it also left me utterly bloated, full to the point of discomfort, and of course, disgusted with myself. It was good.

Since the burger joint was down town, I drug my camera out with me, and my sister and Carl (Bro-in-law) accompanied us around a few blocks. Mendee also hammered out a bunch of pictures for me to edit and get loaded up. Some were less flattering than others, but I put the ones I think turned out well on here.

First things first, a quick picture of the burger place’s truck, and seating area as we walked up. Then I took a picture of Carl, Mendee and um .. Juno pretty quickly. After I got home and started editing the pictures, I noticed the building was clear, but my sis and Carl were blurry. There’s a couple pictures of Juno, and the first picture is the burger place.

Across the street they’re (assuming the construction guys are a “them”, thus they are) doing some work on some of the stores that are on the side of the street. The walk way cough my eye a few times, so I took pictures of it. Not a lot to say.

A few randoms from before we started to wonder around. Nothing really to tell, just a few images I like for one reason or another.

After we observed the refurbished Chief sigh, we headed over to Poky High (Pocatello High School). They’ve almost doubled its foot print since Mendee went there, and I had Mendee fire off some pictures of me Indy, and Charlotte. Here are a few of the fun ones.

Across the street from Poky High is a little Church that just looked cute (When an Atheist is snappin’ pics of a church, you know the church must be photogenic). To contrast the con-structural beauty of the little church against the boxy simpleness of the union’s building. I also really like to punch off pictures of plants, up close with back light, and open streets with nice views behind the obvious.

Since Jamie is in Job’s Daughters, I was a DeMolay way back, and Mendee dabbled in the Job’s Daughter’s back in the day, I stopped by and snapped a few pictures of the bland square building. You’d never know that inside, it is beautiful, architecturally creative, and full of meaning for those that attend.

Whoop got some wondering around images while we made the circle back to our cars. Weird little second hand store, folks watching “Live at 5” (I think it was what it’s called), and a self portrait in a window’s reflection.

It was really nice to wonder around with my sis and Carl. Get a few pictures with a couple of my kids, and see some parts of Pocatello up close I hadn’t seen since 1987 (literally).

Here’s the stragglers of the pictures I think are good enough to go public but don’t really have a story to go with them except they are interesting to me, I like how they “feel” and some are just pictures I liked in the moment.

Enjoy the things you don’t expect.